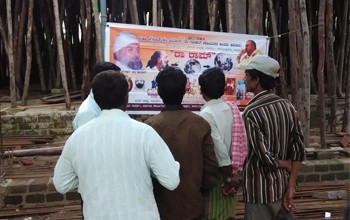 On December 9, 2011, our members in Tihar Jail were finally released with the help of the United Nations, the Indian government, and the Canadian and American governments.

The inmates were welcomed outside Tihar Jail by a jubilant group from our Kalki Avatar Foundation branch in New Delhi. They celebrated by parading banners bearing images of the Awaited Kalki Avatar Lord Ra Gohar Shahi, His Appointed Representative, His Holiness Younus AlGohar, and the divinely ordained signs. Many passersby also stopped by to learn more about our mission and the message of divine love.

Having come to India from Pakistan seeking safety after being persecuted for their faith, members of Kalki Avatar Foundation and Mehdi Foundation were arrested when they staged a protest against the Pakistani government in New Delhi. During the demonstration, many protesters burnt their Pakistani passports in a whirl of emotions, which rendered them illegal in India and led to their arrest.

Because their lives were in great danger in Pakistan, the inmates were sent to start fresh in Canada and the United States of America.