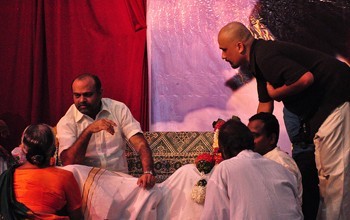 #AskYounusAlGohar - How Do Inanimate Objects Communicate?

The Kalki Avatar Foundation Delhi Team celebrated the Hindu Festival Navratri - a celebration of Durga Maa - over the period of two days at the Durga Maa temple in Chhatarpur. Thousands of worshippers come to this temple to revere the Hindu Goddess, Durga Maa; the team took this opportunity to raise awareness of The Awaited One, Kalki Avatar Ra Gohar Shahi and His teachings of Divine Love and Global Unification. All those who stopped and listened were jubilant and immediately took the invocation (simran) of 'Ra Raam'.