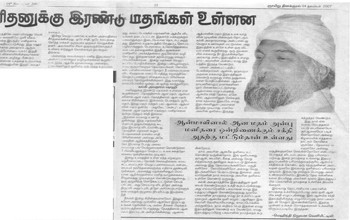 The Commercialisation of Inner Peace

Mr. Mohammad was suffering from tuberculosis and had a brain tumour. He requested His Holiness Younus AlGohar to spiritually heal him, and is now...

Successful Tour of the Harsoop Colony, in India

A few miles ahead of Dera Mandi, our team also payed a visit to the Shani Dev Mandir, where they distributed leaflets bearing the images of Kalki Avatar Ra Gohar Shahi.

After the successful visit to the Shani Dev Mandir, members from our team also visited various districts within the same area. A large banner displaying the miraculous images of Kalki Avatar Ra Gohar Shahi on the Moon, Sun and Maha Shivling (Holy Black Stone) was shown to a gathering of 40-50 families. The response was fantastic! An overwhemling amount of aspirants received our message happily and were pleased to hear about the Awaited One. One recipient of our message said,

‘I am so grateful to the Kalki Avatar Foundation Team for coming along to our district, and bringing a message which is going to change our lives forever.’