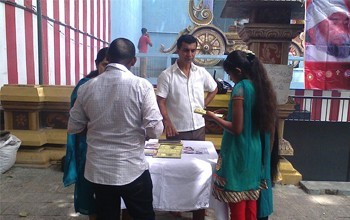 The Religion of God

We sincerely want to bring about spiritual revolution, and nothing else

Kalki Avatar Foundation aims to wipe out hatred from the lives of humanity and from society, in addition to elevating mankind towards divine love and peace. We want to revolutionise humanity with the decisive teachings of Kalki Avatar Lord Ra Gohar Shahi and unite them in the fold of divine love!

Our mission is universal. It is to enlighten all human beings with the divine energy generated from spiritually implanting Simran in the hearts. We aim to create unity between all peoples no matter their religious, cultural, or national backgrounds. We raise awareness of the miraculous teachings of Lord Ra Gohar Shahi, through the help of which humanity can attain inner and outer peace.

We do not oppose nor disrespect any religion; however we understand that the spiritual systems in the religions have diminished today, due to which morality and mutual love is on the decline while hatred, contempt between religions, and the inner evil instinct within human beings is on the rise. Today, because of the extinction of the spiritual system within all religions as a result of adulteration made to the Holy Scriptures over time, the religions fail to provide spiritual sustenance to the hearts and souls. Human beings have become disheartened by religions and have thus shunned the quest for inner enlightenment. Kalki Avatar Foundation endeavours to practically render spiritual nourishment to thirsty hearts and souls, and revive trust in the divine. We aim to cater to the spiritual needs of humanity.

Kalki Avatar Foundation is extremely pleased to herald the coming of the Saviour of Humanity, Prem Avatar Kalki Avatar Lord Ra Gohar Shahi, who is bringing about a new era of mutual love and enlightenment. We raise awareness of Him, His teachings, and the Divine Signs that have been manifested on the Moon, Maha Shiv Ling, Sun, etc. so that humanity may recognise true hope!