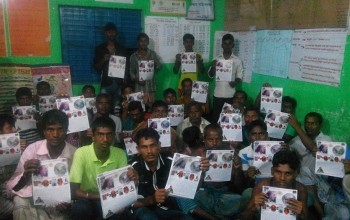 On the 16th of February, 2014, a team from Kalki Avatar Foundation, Bangladesh, toured the Bakhsho Nagar Nawabganj District in which they held four very successful programmes.

The first programme was arranged by Mr. Dilip Das in Moni Rishi Colony, where more than one hundred people embraced the divine message of Kalki Avatar Ra Gohar Shahi. Presenters from our team pointed out the divine signs of Kalki Avatar on the Moon, Sun and Maha Shivling. Many people were extremely happy after receiving the message and asked to receive heart invocation of Ra Raam. Free spiritual healing was also offered to them by our team.

The second programme was held in Moni Rishi Colony, Kumarganj which was attended by more than 100 people. Our presenters offered heart invocation of Ra Raam as well as free spiritual healing. At the end of the programme, many people approached our team and invited them to deliver this message to their colonies.