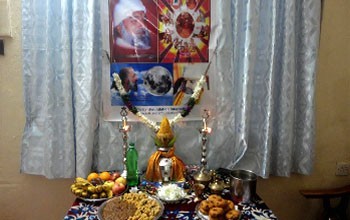 On the 20th of March, 2014, a team from Kalki Avatar Foundation Bangladesh was invited to the Kali Mandir in Kusumpur Manipuri, Bikrampur organised by the temple committee in celebration of Holi Puja. More than 400 people were told about the divine signs of Kalki Avatar Ra Gohar Shahi on the Moon, Sun and Holy Black Stone (Maha Shivling), and were given invocation (simran) of the heart of 'Ra Ram.'