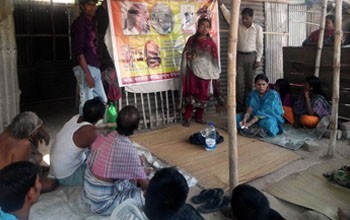 On the auspicious occasion of Maha Shivratri, a Hindu festival celebrated every year in reverence to Lord Shiva, our team from Kalki Avatar Foundation India visited the Shiv Temple and the Kalka Mandir on the 26th of July, 2014, to spread the teachings of Kalki Avatar Ra Gohar Shahi and to raise awareness of the divine signs. Our team was very popular at the Shiv temple as more than 200 people were gathered to hear our message. Many people were pleased to be granted the free spiritual healing from our team.

Members from our team also distributed over 500 leaflets at the Kalka Mandir in Delhi. A huge banner depicting the miraculous images on the Moon, Sun and Maha Shivling (Holy Black Stone) was also displayed outside the temple. A large majority of temple-goers accepted the message of love and took invocation (simran) of the heart.