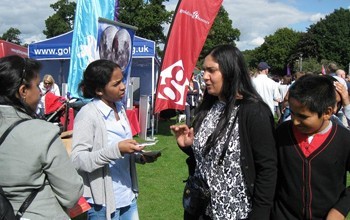 The Kalki Avatar Foundation at the Maidstone Festival, UK

The Power of Love and the Maha Shiv Ling

The following is a report from our team partaking in the Shri Krishan Janam Bhoomi Festival in Mathura on August 17, 2014.

Today, all throughout India, Hindus have been enthusiastically and zealously celebrating the Shri Krishan Janam (the birthday of Lord Krishna). A team from Kalki Avatar Foundation Delhi went to Mathura to give the message of Kalki Avatar Ra Gohar Shahi.

Some asked in astonishment, 'The reincarnation of Kalki is here?' while some others fervently asked, 'How can we meet Maharaj Kalki Avatar Ra Gohar Shahi?'