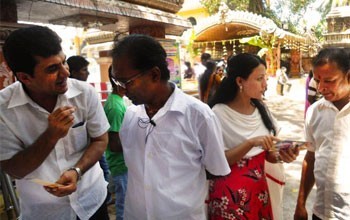 On the 7th of July, 2014, a delegation from Kalki Avatar Foundation India set out to propagate the miraculous teachings of Kalki Avatar Ra Gohar Shahi. Thousands of people from all over India travelled long distances to recieve blessings and pay their respects to the Hindu Goddess (Kali Maan) at the Kalka Mandir.

Our message was very well-received! Members of our team raised awareness of the divine signs of Kalki Avatar Ra Gohar Shahi on the Moon, Sun and Maha Shivling (Holy Black Stone).

An aspirant from Bihar, a state in the eastern region of India, was suffering from a severe chest problem. He said,

'I have been coming to this temple for so many years, in hopes of being healed, however nothing ever happened. But now, after taking the spiritual healing from the image of Kalki Avatar Ra Gohar Shahi, I can already feel my illness going away! It's like a huge weight has been lifted off my shoulders.'

Another recipient of our message, who lived near the Rajpura Station in Delhi, was so pleased to hear about Kalki Avatar Ra Gohar Shahi that when she saw His image on the moon, she began to kiss the image out of respect. She was ecstatic to meet our team members and invited our team to present this message to her family members.

Furthermore, a man from the town of Dakshipuri met with one of our team members and said,

'I have heard about Guru Gohar Shahi, and I've been wanting to meet your team for a very long time. I am so exicited to finally hear more about Him and His teachings of divine love.'