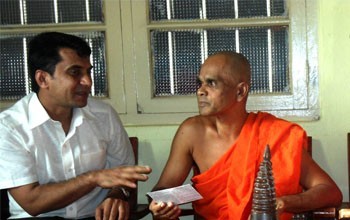 The Commercialisation of Inner Peace

Mr. Achook had a disability in that he could not speak without stammering. When he took initiation of the heart from the image of Lord Ra Riaz...

On 30th of August, 2013, the officials of Kalki Avatar Foundation were kindly invited by Mr Ram Kumar Ridoy (administrator) to take part in the celebration of Lord Krishna’s day of birth (Krishna Janmashtimi). The event was held at the Kali Mandir in the Jaowlla Hindu Colony, Boinna, Dhaka District, accommodating over 200 people. The officials of KAF foundation granted invocation (simran) of the heart to people through Kalki Avatar’s image and also showed the Divine Signs of Kalki Avatar on the Moon, Maha Shivling and on the Sun. The programme was a great success as many people wholeheartedly embraced the message of Kalki Avatar Ra Gohar Shahi.