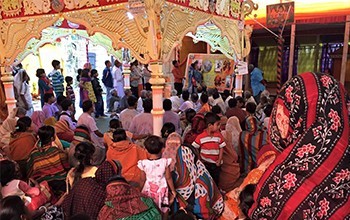 A team from Kalki Avatar Foundation India participated in a festival in Rajasthan, where they displayed banners depicting the miraculous images of Kalki Avatar Ra Gohar Shahi on various celestial and terrestrial bodies. They also offered free spiritual healing. Our team reports that when the news spread among festival-goers that Lord Ra Gohar Shahi’s image is on the Moon, people began to flock to our team to learn more.

During their time in Rajasthan, our team also met a young man whose house had been robbed, and he had been searching for a specific item for some time. After receiving our message, he went home and asked Kalki Avatar Lord Ra Gohar Shahi for help. The next day he contacted our team to tell us that he had found what he was looking for.

Our message was incredibly well-received. Many people also were granted simran of the mantra ‘Ra Raam’ from our designated spiritual ministers.