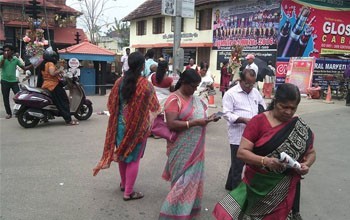 Mr. Mohammad was suffering from tuberculosis and had a brain tumour. He requested His Holiness Younus AlGohar to spiritually heal him, and is now...

Our Message Reaches Residents of Kerala!

On the 13th of December, 2015, members from KAF India paid a visit to Kerala, South India where they propagated the message of divine love and global peace. They visited the Sree Poornathrayesa Temple situated in Tripunithura, Kochi. Kochi is the capital of the former Kingdom of Cochin. The temple considered one of the greatest in Kerala. It is famous for its yearly Utsavams or festivals. During our visit, many people, old and young alike, were present at the temple paying their respects to Lord Vishnu. Our message inspired thousands of people! Passers-by, pilgrims and locals were given the universal teachings of love and harmony. Our team also distributed leaflets to attendees at the temple.