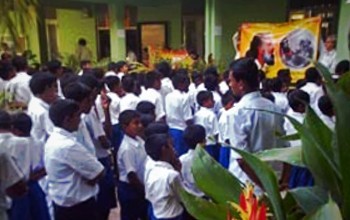 Propagation at the Meherpur District, Harijan Colony in Bangladesh

On the 22nd of April, 2014, a delegation from KAF Bangladesh went to the Meherpur District in Harijan Colony, Bangladesh to hold two programmes. The first programme was attended by more than 50 people, among which two women were so overjoyed with the revolutionary message of Kalki Avatar Ra Gohar Shahi of Divine Love and Global Peace that they decided to hand out the leaflets with the Divine Signs in the entire colony.

The second programme was held outside a temple, and upon hearing the Goharian Philosophy of Divine Love the temple manager personally approached our team and said,

'I admire what you preach and that you speak of practicality. I have never heard such marvellous teachings before! I, too, want to obtain blessings from the image of Kalki Avatar.'