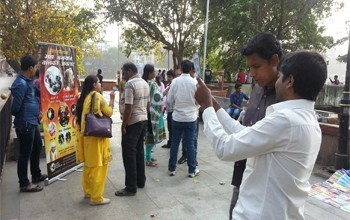 The Kalki Avatar Foundation at the Maidstone Festival, UK

Kalki Avatar Foundation participated in the colourful festival of Kent County, London in September 2010.  The crowd was approximately 10,000 and the event was very sucessful.

In the words of Nilma Prabhoo, the president of Kalki Avatar Foundation,

‘Two of us were interviewed by a news channel, and the message of Kalki Avatar Ra Gohar Shahi was introduced. The divine signs were also shown to the interviewers.’

‘It’s amazing how gracefully the outer London counties are receptive to the message of divine love!  We even had young children coming to our desk to pick up Lord Ra Gohar Shahi’s picture and then walking away shyly. Some people inquired whether we had a healing centre in Maidstone. We expressed our willingness to hold workshops in Maidstone if enough people were interested. ‘