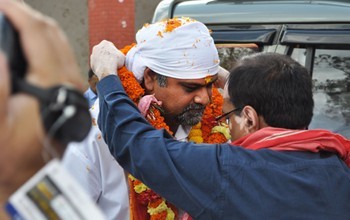 The Paris Attacks - Our Official Statement

KAF has always opposed all forms of terrorism. It is deeply shocking and painful to see the carnage that took place in the heart of Paris. Today, we stand with France against ISIS.

We have always maintained to say that the threat of ISIS and its followers will continue to grow as long as our world leaders do not take proactive measures against ISIS. We strongly advise world leaders to put aside their differences and unite against ISIS immediately.

'In the vast interest of humanity and its safety, it seems to be crucial now that the West resolve the issues with Russia and unite all allies against the filthy ISIS.' - CEO of Kalki Avatar Foundation, HH Younus AlGohar, in his personal statement

Furthermore, we urge think tanks and our leaders to understand the backbone of ISIS and similar groups: Wahhabism. Wahhabism is the ideology that can be defined as hate speech; it is not only a threat to the Western world, but also to Muslims everywhere. During this difficult time, it is important to remember that terrorism has no religion. Today, with the help of Saudi Arabia, Wahhabism has distorted the face of mainstream Islam. It has infiltrated the Western world.

The measures taken against ISIS must be multi-dimensional. In addition to beginning a large-scale military campaign against ISIS, world leaders must root out the ideology of Wahhabism. For our recommendations on how to achieve this goal, read this article.

'Mosques of the Wahhabi sect are factories of terrorism.' - HH Younus AlGohar

It is essential that Wahhabism be eradicated, for as long as it exists, the world is not safe from terrorists.

From the desk of Messiah Foundation International, I am requesting all leaders of the world to make an alliance. With a combined force, they must finish ISIS.

Almost fourteen years ago, when New York was under attack and the twin towers fell and more than 5 000 people died, the United States of America formed an alliance and attacked Afghanistan [in a campaign] against the Taliban. But to be honest with you, ISIS is doing more damage to the international communities than historically the Taliban has done.

When an alliance had been formed to defeat the anti human organisation of the Taliban, I wonder why the international community is quiet. The United States, the United Kingdom, France, Germany, Australia, Japan and all other developed countries should combine forces and crush ISIS. This is the need of the time. You have no time to waste.

The government should take this step: forming an alliance and combatting these evils of ISIS and the Taliban. Thank you so much.