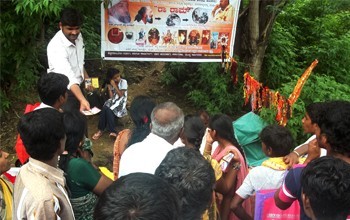 On the auspicious occasion of Ghanpati Visarjan, a Hindu festival celebrated in honour of the God, Ganesha, our team from Kalki Avatar Foundation India on the 8th of September, 2014, took the opportunity to raise awareness of the divine signs of Kalki Avatar Ra Gohar Shahi as well as His merciful teachings on Divine Love and Global Unification. Members from our team distributed thousands of leaflets at Jamna Ghat, a town situated near the Kashmiri Gate in Delhi. The response was fanstastic! Many people after receiving our message kissed the image of Kalki Avatar Ra Gohar Shahi in respect.

Mr Aman Bhardwaj, a recipient of our message, was so inspired that he wanted to spread this message throughout the entire neighbourhood. A member from our team added,

‘Mr Bhardwaj saved the image of our leaflet bearing the images of Kalki Avatar Ra Gohar Shahi on his phone and said he would deliver this message to his friends and family on Facebook.’

People from various towns in Delhi participated at the festival and were extremely pleased to hear about the coming of the Awaited One!