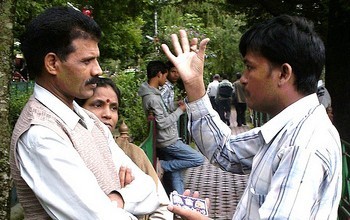 Reporters from the Virakesari Newspaper, a major Tamil-language newspaper in Sri Lanka, having attended the Ra Ram Conference in Colombo, publish a short piece on the event.

The following is a translation of the original article, published in Tamil.

All Religions Await the Last Avatar

The representative of Kalki Avatar gave blessings and meditated with all those attending the event. He explained how one can connect with the Lord through the right method of meditation.

‘Every religion has named God in their own way; the correct method is to use that name of God, whatever it may be, to generate spiritual light in order to connect with God, and this will also purify you.’

He went on to say that on Poya Day (Day of the Full Moon), humanity should look up to the moon and they shall be blessed. Because on the Moon, the image of the Last Saviour Kalki Avatar, Ra Gohar Shahi, has appeared.

Numerous respected members of the Sri Lankan community showed a great amount of reverence for the representative of Kalki Avatar, Younus AlGohar, who comes from London, United Kingdom. The members of Kalki Avatar Foundation Sri Lanka welcomed him with their own tradition. He did the first presentation at Ganapathi Pooja after the Moon Pooja from Mugathuvaram Nithyalaya Music Centre. Miss Meena performed a group Bhajan, followed by a traditional dance by a group from Wattala, Colombo. A “Mother” from Palaiyuru Nagapoosani Amman, Batticoloa supported the mission of Kalki Avatar Foundation, and deemed it to be true.