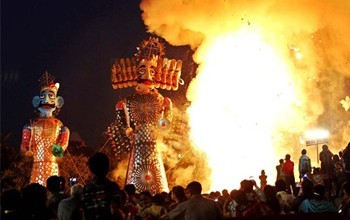 Ms. Ahmed had breast cancer. After spiritual healing from His Holiness Younus AlGohar, there is no sign of the cancerous tumour in her body.

Why God can only send one Universal Redeemer and Saviour for humanity.

More important to us now is the spread of true concept of Imam Mehdi. Firstly, what is the truth in our explanation and concept of Imam Mehdi? What is wrong with the Iranian and Sunni concepts of Imam Mehdi? Why should people believe in the concept of Imam Mehdi that we are presenting to the world? We will have to go through a number of things before we can possibly convince people to believe what we are saying. The most important thing is the source. Humanity is waiting for a Universal Redeemer, Universal Saviour, Universal Unifier. Every celestial religion has given that Universal Redeemer and Saviour a particular title. This title does not mean that the Universal Saviour - who, according to the divine plan, will come to this world towards the end times - is many personalities, not one. God has initially given concrete, solid hope to people who will live in the end times. Humanity has been living in this sphere of the world for many million years. The early part of life in this world was not spiritually, theologically or religiously so enriched or advanced.

Only 6000 years ago when the last of all Adams was sent, for the first time in human history, God allowed human beings to develop a more personal, exclusive and intimate relationship with him. This Adam (known as Adam Safi Allah) was given mystical and spiritual knowledge.

Before this Adam, spiritual knowledge was not granted to any of the many thousand different types of offspring of different Adams. In the pre-Adam Safi Allah era, since no spiritual knowledge was granted to human beings, none of them was able to be in contact with God. Before the arrival of Adam Safi Allah, God was completely cut off from human beings.

No human being was in contact with God; no direct or indirect contact was possible to be made.

Every human being had and has souls and spirits. The knowledge of the soul - which could enable them to worship God with the soul and spirit and be in contact with God - was not granted to them. The last of the series of Adams, Adam Safi Allah, was granted knowledge of spirituality. Then, more than 100 000 prophets were sent. The last prophet of all was sent into this world almost 1440 years ago. Since then, humanity has not been blessed with the presence of any messenger or prophet from God. As a result, the glory of religions which were established by God-sent prophets and messengers started to fade away.

The life of those religions started to weaken; a time came when they became spiritually redundant. People were unable to use these religions to reach God.

Of course, there are thousands of practitioners of these religions today. Muslims, Jews, Christians, Hindus, Sikhs and all sorts of people are worshipping God every day in their respective worship places all around the world.

However, the purpose of these religions has completely been lost. Man is not quitting his old habit of bloodshed and hatred.

How do we believe people who practise religion today have made any use of the religious knowledge when they are still stuck with their diabolical nature of holding grudges against each other, shedding blood and promoting hatred? Even with the enormous amount of worship they carry out each day, they do not seem to benefit from the practice of their religions, which clearly indicates that religions have lost their glory and spiritual mediumship. What they wanted to achieve through practice of religion is not to be attained. We have seen dedicated worshipers. If worship could have gotten them anything in terms of a good character or turning these individuals into nice and kind characters, they would have done it. However, the worship is not affecting them. Out of millions of years, these last 6000 years are a very rare patch of time in which the spiritual knowledge was introduced. It has been almost 6000 years now, but the last prophet came almost 1500 years ago.

The time spent in which the knowledge of spirituality was introduced and done and dusted is 4500 years. There has not been a prophet or messenger in the last 15 centuries. This is the reason why God had a plan of sending a Universal Redeemer.

Some people say, ‘We have a Messiah,’ others say, ‘Imam Mehdi is for Islam only,’ and some others say, ‘Kalki Avatar is for Hindus and Kalkidaan is for Sikhism only.’ God has run out of messengers and prophets. Very scarcely, he has come with an idea of a Universal Redeemer and Saviour who will come and unite everybody, who will serve everybody and connect everybody to God. God has nothing to do with your body. Your body was created in the womb of your mother, God didn’t see it and will not see it. When you die, your body will be cremated or buried. When God sends his message, he sends it to correct and purify your soul - to enable your soul to worship him. There are only five spirits in a human breast and there have already been five Grand Messengers, who introduced five different types of knowledge.

Five Grand Messengers have been sent; knowledge relating to these five spirits has already been introduced, adulterated, modified and forgotten. That knowledge is becoming extinct now.

Nobody knows what the teachings of Adam, Abraham, Moses, Jesus or Mohammad were. It’s all done and dusted. What people know today as Islam is slashing throats of people, going to mosques, standing there for a few minutes in Salat, eat halal meat and have four wives. The knowledge of Prophet Mohammad is long forgotten. There is not another soul in the human breast which is needy of any knowledge; all the knowledge has been sent. That is what God planned. God is absolute power, but if God wanted to send another messenger, he must have planned it earlier. Now, he can’t do it. For example, a boy says, ‘I wish I was not my father’s son, I wish I was someone else’s son.’ Well you are already born; nothing can be done now.’ Not even one messenger or prophet can be sent by God now, because when prophets and messengers come from God, they bring knowledge from God. When you assembled before God, it was not your body, but your soul.

If you will ever be in contact with God, it will happen through your soul, not through your body - because God is not aware of your body.

Now people are falling out on the issue of the Awaited One! It’s as if [religious people are] kids, not adults. There is only one playground and all the kids have to play in it. If Christians say, ‘We want a Christian playground,’ and Muslims say, ‘We want a Muslim playground,’ it doesn’t work like that. All Christians, Hindus, Jews, Muslims have to play in the same playground. People demand a different Redeemer and Saviour from God. They seem to want God to allot a Redeemer with the same authority and power into each religion. If God was that generous, he wouldn’t have stopped sending prophets and messengers.