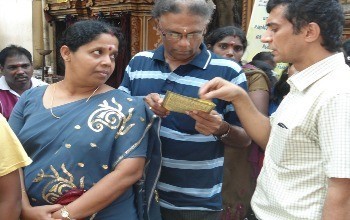 Almost all religions await the arrival of a Messianic Personality in the end times: a Divine Personality and the saviour of humanity, who shall appear in the darkest era of human history.

When all hope is lost, when the prayers go unanswered, and when mankind has lost faith in the deity, then the Awaited One, The Unifier and Universal Spiritual Master Guru Gohar Shahi, shall appear in this world. Guru Gohar Shahi introduces Divine Love to the entire humanity and brings about the concept of One United Nation into which all religions are meant to merge. He is the awaited personality which is mentioned in all celestial books and known by various titles in religions. The Jews and Christians await the Promised Messiah, the Buddhists awaited the Grand Buddha, the Muslims await the Imam Mehdi, and the Hindus await the Kalki Avatar. Do you think these are different personalities? The spiritual character and work of each of the above mentioned personality is almost the same, and God sent all these religions. If each one would try to impose his doctrine upon mankind and bear the same authority and power, wouldn’t a tug-of-war between them begin? Beware! The Awaited One is one personality known by various titles in different religions. Since all the existing religions are meant to merge into the Religion of God (Divine Love), and the entire humanity is supposed to embrace this brand new religion, therefore, one single personality will suffice for the spiritual needs of all the religions and faiths.

There are two types of backgrounds to everybody; one from this world and the other from another world, where we come from. It's useless to talk about the background of this world; because it doesn't matter where you were born, what colour your skin is, what language you speak or which religion you follow. The background of this world is useless in the sense that the soul (aathma) of every human being comes from the Higher Realms, where everybody is equal. There were not any Hindus, Christians, Muslims or any other religion there.  All the souls were created by God and when these souls were sent to the world, they lost the Divine Connection with God. Therefore, God sent prophets and saints who established religions to help human beings reunite with God.

The essence of all religions is Love of God. And this has been lost. The religions are now confined to the physical worship of the body only, whereas the souls remain darkened and unenlightened. Prem Avatar Kalki Avatar Guru Gohar Shahi has come to grant Divine Love to the aspirants and awaken the dormant hearts and souls. Guru Gohar Shahi is the Messenger of Love and Peace and He has come to restore the Divine Connection between the Creator and his creation by enlightening the hearts with the Prakash (Divine Light) of the Name of God.

Hindus call God Bhagwan, Muslims call him Allah, and Christians call him God. The Community of Sikh call him Ek Onkar. Therefore, many people call upon God with many different names and all these names are worthy of respect. However, God is one. God has many foundations, he has so many faces. If he sits in a temple he is known as Raam, Bhagwan and Krishna. If he sits in a Mosque, he is known to be Allah. And if he sits in a Church he is called God. For example, in Urdu and Hindi, water is called 'paani', in Iran people call it 'aab', in Arab people call it 'maa', and in English it is ‘water’. Now, if you are thirsty, does it matter what you ask for, whether it is maa, aab or water? The substance is the same, no matter what you call it. Similarly, Guru Gohar Shahi Kalki Avatar is the Prem Avatar and he will grant you Divine Love, no matter what name you use to call upon God.

How will Guru Gohar Shahi grant you Divine Love?

Today no matter how much money, comforts and luxuries is in our possession, we lack peace of mind. When we sit in a Sangat where we hear Bhajans, temporarily we find peace of mind. But as soon we leave the premises, the problems come again. So, this is very temporary. Now the speciality of Kalki Avatar is that he can establish that Bhajan ceremony, that Sangat, in your soul. Even when you are sleeping, you will have that Bhajan going on constantly. When we are in adversity, we call upon Bhagwan. We say, ‘Bhagwan, help me, I need you.’ And Bhagwan helps us. But if your heart and soul constantly call upon Bhagwan, then no problem will come. This is such a stage where we do not have to make any effort. We may find it difficult to continue to sing for hours and hours, but our hearts and souls never get tired. This is how they are designed. They are designed to remember Bhagwan and obtain the love of Bhagwan.