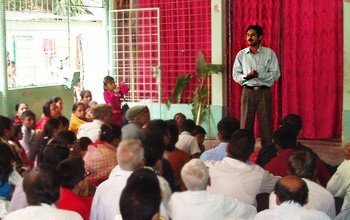 Ms. Heather suffered from Multiple Sclerosis. After receiving spiritual healing at her local church via a spiritual minister from MFI, Mr. Steve...

The third lesson in His Holiness Younus AlGohar's comprehensive course of Self-Awareness, Level 2. This lesson teaches you how to understand the source of emotions and the principles of morality.

The full lecture is available in the English language on the AlRa Tv YouTube Channel. Press the play button above to watch the video.

How emotionally intelligent you are, depends on how good you are at identifying and knowing the difference between thoughts, feelings and actions. Actions can be seen, but thoughts and feelings cannot be seen.

Some people are [better at] controlling their emotions than others. If you are able to control your emotions, people call you a brave person. But that is not bravery, it is just control. Sometimes, we do have emotions but we exaggerate them to earn sympathy; [we may even] fake that act in order to convince people how much we are affected. Sometimes, we fake our emotions to convince people of how much we love them.

Hatred is a form of emotion. Somehow or other, you experience the emotion of hatred even if you are a saint of God. This is because hatred is not just against human beings. Sometimes, you hate your own actions because they can hurt people. Sometimes, you hate your habits. This is because you want to quit doing things, but you are not in control of your actions. You may want to change your lifestyle but cannot do it for a number of reasons. Hatred is something that is a reaction to your expectations - you begin to have this repulsive feeling when [the situation] turns out to be unfavourable to you.

Psychiatrists are not holy people; they are not connected to God, so the knowledge they have [is incomplete]. Some people are so clever, they can intelligently beat psychiatrists. The psychiatrists are looking at the symptoms; perhaps they do not know that certain symptoms can be faked. For example, some people don’t like good moods. If you are in a good mood they [start to take their liberties with you]. So, as a deterrent, you might impose superficial anger [upon yourself in their presence]. Feelings, actions, and thoughts all can be faked.

Psychology is incomplete without spirituality.

Psychology will tell you how mad people behave and why people get angry, but [psychologists] do not know the source of these emotions.

Love can have different sources, that’s why we say there is ‘true love’ and ‘false love’. If your ego is powerful, the source of your love is evil; however, if you only look at the symptoms of love, you will appreciate it. If the source of love is the heart, that love is totally different [from love related to the ego].

For example, [let’s assume that] a holy man is sitting in front of you; he has the presence of His Divine Eminence Gohar Shahi in his heart and he has divine energy running through his bloodstream. If he gets angry and shouts, the divine energy will emanate from his body with his words; that divine energy will burn your sins. That is called ‘Jalal (Majesty)’. When the source of your anger is your heart, not your Carnal Self, [you] benefit humanity even when you are angry.

Ask yourself: what emotion is stronger in you? Is it love or hatred? If you loved somebody, what was the reason? What made you love them? Do you ever hate anybody, action, place or thing? What is the cause? Did you ever think that maybe you are not always right? Do you consider that you need correction sometimes?

Nobody is perfect. You cannot be too arrogant, even if you have expertise in a field. Leave some room for improvement. If somebody rejects you or your policies, or whatever it is, then do not react straight away. Think about it and then see whether or not you are right or they are right. Next time somebody criticises you, ask them, ‘Are you really serious? Tell me what wrong I have done, so I can correct myself.’ Some people will genuinely criticise you, whereas, most will just criticise you [for the sake of it]. You should be smart enough to know which is real and which is fake. Keep your head cool. Anger is triggered by certain things. For example, you might feel irritated because you don’t want somebody to do certain things, but they don’t stop doing it. You may want them to do it your way, but they do it their way, so it triggers your anger. What we can do to help us out from this position is to broaden our minds and think ‘Maybe I am wrong.’ If you are being criticised, ask the critic how to do it correctly. If his/her way is right, then adopt it. Sometimes, hatred is like a blessing. You should feel hatred for the terrorists who are killing innocent human beings. If you don't hate certain individuals, you are actually an enemy of humanity.

I want to help you understand the source of emotions and give you a divine tool of understanding the emotions.

Right now, you do not know what hatred, love and compassion are; you do not know who you are. When you have acquired this tool, you will begin to understand the source of emotions. What you are doing as a reaction now and calling it hatred, later on, you will not call it hatred. For now, you could be thinking that you have extreme love for somebody; [with this tool], tomorrow, you will find out that it was need, not love that you feel. Sometimes it is a necessity and we mistake it for love. Sometimes, people say, ‘I cannot live without you,’ and later on you find out that they were right - but it was your financial help they could not live without. When you are angry, you may say something and later on you regret it. At the time of anger, you didn’t even know that what you said or thought was bad. Now, you just blame yourself and load your heart with guilt.

You need to have a touchstone, with the help of which you can understand different emotions so that you cannot make a fool out of yourself.

Sometimes, you want to tell people something, but you feel the words are not putting your thoughts forward to them. The words fail to [do you justice] and then you raise your voice; you think this is frustration, but it’s not.

Your face is the mirror and [people’s] eyes will interpret whatever is on your face. When you are afflicted by emotions, it is all on your face.

Emotional intelligence is to determine what the reason could be behind someone being quiet. If you know this, you can read faces, because faces are full of information.

In ethical values, religious values and spiritual values, there is no room for hatred. If someone wants to be a religious man, let him be a religious man and respect his choice. If someone doesn’t want to be a religious man and doesn't want to follow moral values, let him make his own choice. Why are you affected by his choice? Is God affected by those who don't accept him as God? Whether somebody is good or bad, it is none of your business. Whether you are good or bad, it is none of my business. Even religion says that whether somebody is good or bad, you have nothing to do with this. There is a day known as Judgement Day. Let God judge people; you shouldn’t judge anybody. Everybody thinks, ‘I am the nucleus of knowledge. Anything not aligned with me is wrong.’ That’s not true.

When you think somebody is morally imperfect, you are actually comparing him to yourself; it is because you think you are the best and he is imperfect. You can say this only when you have perfected yourself - however, nobody is perfect.

Jesus was walking and he came to a point where he saw a very noisy mob. He stopped and asked, ‘What’s going on?’ They said to Jesus, ‘There is an adulteress here, and according to the Sacred Law of Moses, we are pelting stones at her until she dies.’ Jesus said, ‘Wait. Listen to me carefully. In this mob, is there an individual who has never sinned?’ There was nobody who had never sinned. So Jesus said, ‘If you have never sinned, then you pick up that stone and throw at her, because you are not a sinner and she is a sinner. However, if you are also a sinner, then you cannot punish another sinner.’

Every single person is affected by the original sin mentioned in the Bible and Koran. You and I cannot punish anybody. We can dislike [people and their actions] but don't compare [yourself with others]. When you compare, you are not in pursuit of being good; you are in pursuit of being jealous. The source of comparison is jealousy. You are not elevating the standards of morality by doing that.

His Divine Eminence Gohar Shahi is my witness, I am under oath: HDE has given me a lot of love, but not even for a microsecond has this thought ever come to my mind that I am better than somebody. It’s not that I assume I am the bad guy. It’s not based on my assumption. This is natural because I have known myself for many years. I know the only thing that makes the difference is HDE Gohar Shahi’s spiritual attachment. The fact that we belong to HDE Gohar Shahi is what makes us different from others.

You cannot judge people because you do not know everything about religion or morality.

Sometimes, pinpointing people when they are doing wrong is an act of morality, but sometimes, seeing people doing something wrong and keeping quiet is morality - because you do not know the intentions. What may appear to be wrong may have been designed to appear wrong, however, it is addressing the genuine issue and helping somebody out. Don't ever think you are better than anybody.

God doesn't look at past or present, God looks at the future.

There is a day for judgement and it is just God who will judge people according to his criteria.