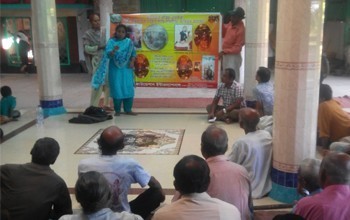 Programme at the Nagarhat District, Bangladesh

In Kalki Avatar, Lord Vishnu will incarnate himself as Kalki, the machine-man, who will come riding His white horse and with His blazing sword in His Hands.

This is supposed to be a future Avatar of Lord Vishnu. At the end of Kali Yuga (the present era), He will punish all evil-doers in this world, destroy this world supposedly, and recreate a golden age again.

Kalki is the Last Avatar of Lord Vishnu!

We Are Living in Kali Yuga

Today the wave of hatred has engulfed the peace of the world. People of the same creed and religion begrudge each other. Some of them are not hesitant even to take the lives of each other.

Aathmic Gayan (mysticism or esoteric knowledge) in all religions teaches the way of bringing the substance of love in human hearts. This Aathmic Gayan was instrumental in enlightening hearts and wiping out the vices of heart. With the passage of time, the spiritual aspect in all religions ceased to exist. Thus, people got disconnected with Bhagwan. As a result, vices such as hatred, arrogance, holding grudges, animosity, envy, jealousy and stinginess became the norm of society. These evil traits point to the devil residing within man. These prevailing traits are now gathering momentum everywhere.

Today, religions are left with Dhermic Gayan (exoteric knowledge or knowledge in sacred books) only to preach hatred. The pundits and religious clerics are preaching in the Churches, Temples and Mosques that their respective followers are better than others, thus planting a seed of hatred and division in the society, which has grown in leaps and bounds with the passage of time.

Today, no society in the world is leading the way to any reformation or revival. On the contrary, religious elements are proactively engaged in promoting hatred and militancy against other schools of thought. The true influence of all religions has come to an end, thus making human life miserable. It is the Law of Nature that when any group that does not do the assigned task or turns back from what it has been assigned to do, another group is substituted to do the assignment instead. To root out this wave of hatred and to instil love, peace, harmony and justice, the Awaited Kalki Avatar Ra Gohar Shahi has appeared in the world. He will restore balance, wipe-out hatred, and plant the seed of love in human hearts.

Today you are Christian, Hindu or Muslim, not by a choice, but by virtue of birth in a certain family. The religion of the body ceases when the person dies; whereas the religion of aathma existed since the Primordial Time, and will continue to exist even after the life in this phenomenal world ends. Kalki Avatar Ra Gohar Shahi explains that love is not a name for feelings, but it is the existence of something in the heart. Just as water is contained in a glass, love is contained in the hearts. We need to bring love of Bhagwan in our hearts.

People talk about love, but none demonstrate the technique of bringing love in the heart. Your aathma is entangled in the veins and arteries. To awaken your aathma, you need to energise it with Divine Energy; the heart is a gateway to travel towards your aathma. Bhagwan dwells in the Celestial Realm. We cannot bring Bhagwan into our heart, so bring His light, His Divine Energy instead. This Light is not to be found anywhere in the Books, may it be Qur’an, Bible, Geeta or any other Celestial Book. Nor is it to be found in the Churches, Mosques, Temples or Synagogues. So how do we bring His Light inside?

Once the Divine Energy is filled in our hearts, you are saying prayers and Bhagwan is answering them because you have Bhagwan’s presence in your hearts. This is how you bring Light of Bhagwan into your hearts. The more you practice it, the more Divine Energy is granted. This is the Spiritual Path leading to Bhagwan, and it starts from your heart. When you traverse on this path, you are bound to reach Bhagwan one day. When the heart is articulated with the Name of Bhagwan, these tick-ticks become your footsteps. Then these two beats of heart walk you towards Bhagwan. The more Divine Energy (Prakash) you have, the faster you run towards Bhagwan. One day you will reach Bhagwan Aathmic Gayan. Not you, not your body, but one of the duplicate presences of your heart will reach there.

In the case of the Religion of the Body, one needs to teach rituals such as a Muslim teaches his child to recite the Holy Qur’an and to offer canonical prayers in the Mosque. A Buddhist, a Hindu, a Christian and a Jew respectively teach own child about the obligations in rituals. But, in the case of the Religion of Souls, one does not need to teach any rituals because love is in the nature of the soul. You only need to awaken your soul. As soon as soul is awakened, it starts loving Bhagwan, as it is in its nature. For example an egg, after being hatched, starts chirping. Who taught the chick to chirp? None! It is in its nature. Similarly the baby of a goat makes a different voice which was not taught by goat. It is in its nature to call out the respective sounds. By the same token, love is in the nature of the soul. Once awakened, the soul starts loving Bhagwan. Also, these teachings of soul are such that they would be acceptable to all, and have not much to do with body religions.

Once the soul awakens, the Religion of Soul is dominant in your personality. Then you would not say things such as, ‘I am better than others.’ This is the technique through which Kalki Avatar would gather humanity on a single platform, and merge all religions into a single religion. Thus, the entire humanity will be united at hearts. In spite of different body religions, the religion of the souls (Aathmic Dherm) will be common and finally prevail.