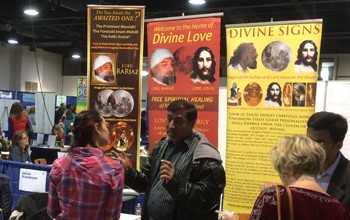 MFI and KAF USA at the Body, Mind and Spirit Expo in Raleigh, NC

In our own way, we have been trying our best to publicise the fact that Lord Ra Gohar Shahi is the awaited Imam Mehdi/Messiah/Kalki Avatar.

Whatever way we have done it was like a cricket match in which you win the toss and elect to bat. You play the first inning and you have no total to chase. You just play and give the other team a target.

In a similar way, we have been trying to promote the divine signs and Lord Ra Gohar Shahi’s doctrine of divine love. Now, the game has changed. There is another claimant in the market. This contender who claims to be Imam Mehdi is from Wahhabi cult: the notorious Abu Bakr al Baghdadi. Al Baghdadi has been promoting himself as Amir ul Momineen (Leader of the Faithful Ones). He has sent messages to different terrorist organisations to pledge allegiance to him and accept him as the promised Imam Mehdi.

When you know the target, it becomes easy; you can plan it well. For example, the other team elected to bat and made 250 runs in 50 overs. Most probably, your plan would be that you need to make five runs per over, so you would tell your openers to spend as much time on the crease as possible and not to worry about the average. They would just need to stay there and guard the wickets. If you’re on the crease, runs come by, even if you don’t make efforts: wide balls, no balls, byes; there is no bowler in the world who doesn’t give you a loose delivery in one over. You have to wait for that loose delivery and hit a boundary. So your plan would be to go with the flow until 25 overs are done, and then go berserk.

In a similar way, now we know what he is doing and what credentials he has to present to the world as divine endorsement. One big benefit that we are going to reap from all this is that the entire world knows that they are terrorists and enemies of humankind. Even Muslims hate them.

Anybody who comes from God, comes to unite hearts. They come to make an everlasting bond between human beings and connect people with God.

Forcing people to worship cannot be Islam. According to the Quran, there is no compulsion in the religion. You cannot force people to be good. In the eyes of God, hearts are shown and the real intent of the heart is shown.

The notion of spreading Islam under the shadow of a sword or gun is totally absurd.

Lord Ra Gohar Shahi has brought down the gist of all religions.

There was a companion of Prophet Mohammad, called Abu Dhar al-Ghifari. He was a very close companion of the Prophet. He was not a strict worshipper; he would give more priority to keeping company of the Prophet Mohammad rather than spending any of his time in worship. Some other companions of the Prophet started to complain to Prophet Mohammad, saying, ‘He is very close to you but we have never seen him in Salat (prayer).’ Prophet Mohammad summoned him and asked, ‘Why don’t you offer salat?’ he said, ‘I do offer Salat.’  One of the companions said, ‘When we finish the Salat, we don’t find him around us.’ Ghifari said, ‘O’ Messenger of God, I heard it from you that the gist of Salat is in prostration. Even in the Quran, God said, “When you prostrate to me, it is like you are discreetly speaking with me.” When I have found the gist of Salat, why should I waste my time in any other activity? I prostrate, speak to God, and go home.’

Similarly, the main thing in every religion is God’s love. The rest is a set of rituals.

God is not going to benefit from how long your beard is or what perfume you’re wearing. It has nothing to do with God.

Love is something that would touch God’s heart. Love is a bond between your heart and God. When you are in love with God, you are in God’s eyes.

Practice of rituals and a religion is carried out for one reason: after having everything done which is known as rituals or worship, you become able to obtain God’s love in your heart.

If the practice of your religion does not produce a result of filling your heart with God’s love, then that practice becomes futile.

We are living in an era where people are looking for a shortcut. People want to become millionaires and saints of God overnight. They don’t want to go to the jungle and spend 24 or 36 years. We now have so many facilities like the iPhone, FaceTime and iMessage. It is very rare that people use desktops these days because the iPhone is doing everything. Since the advancement of technology, man has become really cunning and clever.

People are seeking a concise and precise way of obtaining God.

When you have an illness which is stopping you from your pattern of life, and you temporarily develop limitations and dependency, you want to get rid of it. You want to get well overnight. Pharmaceutical companies have learnt what a man thinks when he takes medicine; therefore, they advertise, ‘This medicine will work in five minutes,’ or ‘This medicine will work in ten minutes.’ You have to calculate human nature and human psychology. The moment people take medicine, they are counting; if it doesn’t work quickly, they say, ‘Throw this medicine in the trash bin. I don’t want this, it is not working!’

When you want to love God and obtain God, you go to a mosque, temple or church; you are worshipping God, but you don’t see any result. Those who are doing this because they must do it, and they have no set goal, will keep doing it. Those who really want to love God and obtain God’s nearness, the moment they start worshipping, they will ask questions. ‘When will I get near to God? I have been to the mosque five times a day and I didn’t feel him near.’ You want the results!

Let me tell you a very important thing which will let you understand why spirituality is the best medicine for you. Lord Ra Gohar Shahi said, ‘You adopt any religion and you do good deeds: you worship, give to charity, and give alms, but the reward of this will be given to you on the Day of Judgement.’ The reward of any worship will not be given to you while you are still alive. It is in pending, in the pipeline.

For example, you go to the mosque five times a day. You study the Quran, Bible, Torah, Talmud, Bhagvad Gita and all Vedas. You go to a temple. You do charity work. You feed your neighbour and you feed your enemy. Do anything, but the reward will not be given to you in this world.

However, in spirituality, Lord Ra Gohar Shahi said, ‘Adopt spirituality and start working on it; it is like pay-as-you-go. The more you purify yourself, the closer you will feel to God. The reward is given here.’

When you have God in your heart, nothing is more attractive or appealing - unless you are a Wahhabi.

The Wahhabi mentality and Wahhabi doctrine: their aim is to have intercourse with virgin girls in paradise. It is a filthy, lustful doctrine. If they’re cutting throats of people, they’re not doing it for God; they’re not God’s warriors. God is not in need of them; if God wants to give death to people, he can do it without needing ISIS, Taliban or Al-Qaeda. When God does it, nobody complains to God. They say, ’It was a natural disaster.’ Look at how clever God is. He kills thousands of people and nobody says, ‘God did it.’ They say, ’It was an earthquake,’ or ‘Torrential rain, floods.’ If God wants to kill anybody, he will do it. Nobody will ever notice he did it.

You practise a religion and do everything good, but you don’t know what your end will be. When, on the Day of Judgement, it is decided whether you have achieved your goal of entering into paradise, your Book of Deeds will have been closed already. You will not be able to do anything good thereafter.

Lord Ra Gohar Shahi has brought down spirituality. It is God’s plan; he does not want people to beat about the bush. Maybe God is clever and realised, ‘With the advancement of scientific technology, people have become so lazy; they want everything there and then. If I continue to behave with humanity in the same way I behaved with them 5000 years ago, maybe they would say, “We don’t want God.”’

God has changed himself because his market is running really low. God is not in demand anymore. God’s graph is going down, like oil these days. There was a time when oil was $158 dollars per barrel and now it is $28 per barrel.

Whether it is a Jew, Christian, Muslim, Hindu or Sikh, they all came here to obtain God’s love, to recognise God. God said, ‘I created humanity, the entire universe for one reason: that they recognise me.’ This is God’s purpose.

God has made some changes. He took the gist of every religion and now he has decided for humanity to practise love. The gist of Hinduism, Judaism and Islam is love; therefore, love is suitable for everybody. Whether you are a Jew or Christian, the principle requirement of every religion upon every single follower is that he or she must obtain God’s love. That is the culmination of every religion.

Lord Ra Gohar Shahi has brought down God’s love; direct transmission from Lord Gohar Shahi and his heart directly to your heart. You become a divine person and your heart starts to illumine with the candle of God’s love. When you love God, you cannot hate God’s creation.

The purpose of every religion was that you learn to love God and become godly.

You’re not becoming godly; you’re becoming rigid Muslims, Christians and Jews. That is not what God’s purpose was. God wanted everybody to love him, therefore this is God’s plan. In this plan, when humanity started, there was only one religion: Prophet Adam initiated humanity and he brought down love. There was no other religion when humanity started; it was one religion and one nation. Now, the Awaited One has come.

In between the two caliphs, Adam and the Awaited One, many prophets and messengers were sent; many religions were established. God is now weary and tired of all these religions and all these differences. God wants to return to the base, back to square one. There was only one religion, the religion of love, and one nation.

God wants the world to end on God’s love and humanity being one nation.