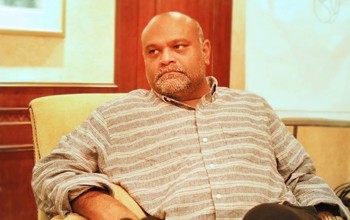 Interview with HH Younus AlGohar: ISIS and Their Ugly Plans

His Holiness Younus AlGohar answers questions from  the Tamil-language newspaper, Thinakkural, about the Kalki Avatar Foundation and its global mission.

The following is a translation of the original Tamil-language article.


All the religions are waiting for the arrival of a saviour, but that saviour will be one for all religions

For the development of his foundation in Sri Lanka, he came to Colombo to attend a program. During his tour, in an interview, he gave the following answers to the questions asked.

Question # 1: what is Kalki Avataram?
Answer: In every religion, there is a belief that an Avataram, a saviour, will arrive. And among one of those beliefs is that of the arrival of Kalki Avataram.

It is said that Kalki Avataram will come riding on a horse with His blazing axe in His hands. And it is said that only Kalki Avataram will bring peace in this world and he will bring this world to its end. Even though many prophecies are present regarding Kalki Avataram in many religions, these religions are speaking about one personality. Because if there were more than one Avataram at a time, then it would not unite human beings; rather it would create wars among them. Every religion is calling their last Avataram in their own way, but the reality is that the personality is only one.

Question # 3: Do you have worldwide discipleship in your organisation?
Answer: Yes. In America, England, India, Sri Lanka, Pakistan, and Australia, our disciples are present. And these members who are from different religions and who speak different languages are gathered together under the platform of the umbrella of divine love. In the discipleship, Hindus, Muslims, Christians, all are present.

Question # 4: How much you have succeeded in your mission?
Answer: Success depends upon what people prefer. Some people love the world, some people love money, but when you have developed love for God, then these things do not the matter for you. You can call God as Buddha, Eshwar, and Allah. We are not acting against any religion, government or any political party. Our message is only love. We are not acting against anyone, and neither are we cheating anyone. We are not differentiating between somebody being Hindu, Muslim or Christian. We are just spreading love everywhere. We are giving love to everyone. I am building among people such a foundation, through which we will come to know what actually love in its practical meaning is.

Question # 5: What kind of problems are you facing across, while performing this mission?
Answer: From the political sector, we have no problems at all. But from Pakistan, we have problems. The Pakistani Taliban is after wealth. In Pakistan, we are not giving our message, as they don’t want to listen to it. This is the reason our mission is not going in Middle Eastern countries.

Question # 6: How do you get the financial support for organisational needs?
Answer: We are an organisation, and we all work too. So, whatever we earn, we contribute and invest in our mission. We are not financially helped by any government or anyone.