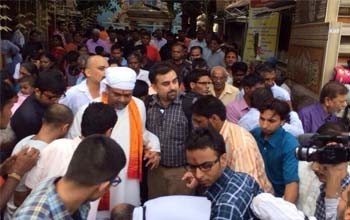 Ms. Ahmed had breast cancer. After spiritual healing from His Holiness Younus AlGohar, there is no sign of the cancerous tumour in her body.

This past week, a group of Kalki Avatar Foundation spiritual ministers set out to explain Kalki Avatar Ra Gohar Shahi’s mission at four events in the Chittagong District of Bangladesh.

The first event, in the Sadar Ghat Kali Temple, arranged by the head of the temple, Mr. Deba Barta Chattarji, was attended by a whopping 1000 people. In the second program, located at the Onukal Thakurashram Dewanji Pukkar lane, approximately 700 people gathered to hear our message. The third program was held in the Uttarkat Toli Kali Temple, where 300 followers of Sanatan Dharma attended. In their final stop before returning to the Kalki Avatar Foundation head offices, our team visited the Purbo Madar Temple, where approximately 150 people happily received the message of Kalki Avatar.

The events were majorly successful and our members noticed an overwhelmingly positive response from the Hindu community. The images of Kalki Avatar Ra Gohar Shahi in the Maha Shiv Lingham, Shiv Temple, Moon and Sun were shown to the audiences; simran of 'Ra Raam' was also granted from Kalki Avatar’s image to aspirants.