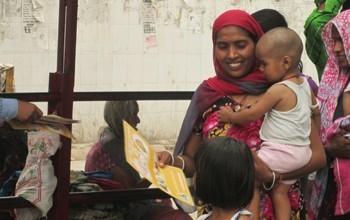 KAF India toured various cities in Uttar Pradesh over the course of April 15, 2013 to May 15, 2013: Fatehpur City, the Village of Zalah (Fatehpur), Khaga, Basti City, Barhata City, Khakhariya Pur, Chakia, Laharpur, Beri, Dhata, the Village of Gharwasipur and Khalilabad. They also visited Ajmer in Rajasthan. They gave people the message of the Awaited Kalki Avatar, Messiah and Imam Mehdi His Divine Eminence Gohar Shahi.  All recipients of our message of divine love and the unique doctrine of His Divine Eminence were extremely pleased and responded positively.  Many people took it upon themselves to spread the word so that it was not too long before people were invoking the divine name ‘Ra Raam’ in every street!

Rakesh Tewari’s experience:
Rakesh Tewari is the principle of the Gharwasipur High School in Gharwasipur Village, Fatehpur. He told our representatives that a year ago he had been hesitant to take the simran of the divine name ’Ra Raam’, but when he took the image of Kalki Avatar Ra Gohar Shahi home and was granted simran of ‘Ra Raam’ from it , he felt immense inner peace and it seemed like something was going on inside him.  After that, his reservations about our mission were cleared and he went on to tell the message of divine love to his entire family, who happily received the message and believed His Divine Eminence Ra Gohar Shahi to be the Awaited Kalki Avatar.  Mr Tewari declared, ‘The message of Kalki Avatar is so great that no one should have any difficulty in accepting it!’

Mr Tewari wanted our mission explained to the students and staff at his high school. He had all the students (who were from various religions) gather in one place to hear our message. We told them the unique, universally acceptable methodology introduced by Kalki Avatar Prem Avatar Ra Gohar Shahi, that of bringing Bhagwan in the heart. We also showed them the divine signs.

Mr Gowardhan’s experience:
Gharwasipur’s Mr Gowardhan, when he was given our message, was extremely happy to hear it. He went on to tell his entire family, who also accepted our mission gratefully. Mr Gowardhan is a security guard in the city of Lucknow. He says that this message should reach every corner of Lucknow and should be spread throughout the entire world.