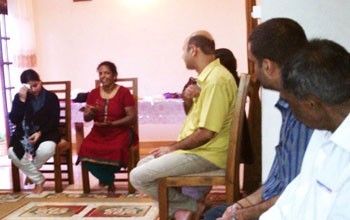 Sri Lanka is a land rich in spiritual heritage, where Shankar Bhagwan descended from Swarg (Heaven). On March 10, 2006, a delegation from Kalki Avatar Foundation visited the Colombo Hindu College. By the time the delegation arrived at the college, the morning puja ritual was in progress. The Principal, the faculty and the students gathered in the open yard to receive the message of Kalki Avatar. There were about 1500 students in attendance.

The President of the college’s Hindu community, Mrs. J. Siva Kumar, said that this event would be remembered for long time. ‘At a time of turmoil such as this, we all need the Divine Teachings of Kalki Avtar Gohar Shahi.’