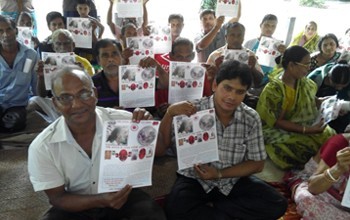 Message to the Government of Nepal

After the irresponsible treatment of Kalki Avatar Foundation members in Nepal, His Holiness Younus AlGohar advises the Nepali government on how to rectify the situation.

Due to poor police work, the Nepali authorities had arrested our members on the basis of completely unfounded accusations - they alleged, due to a 'tip' they had received, that Kalki Avatar Foundation was a terrorist organisation. Media hype also gave the impression to the common public that our organisation was planning to carry out an attack on the Pashupatinath Temple in Kathmandu. When these allegations proved false, the government was left with no exit strategy.

Read more about the situation here.

Too much talk is done on all levels of society. From civil society to the corporate world, what is done under the banner of beautiful, sweet words is phraseology; lip-service. This organisation is the flag-bearer of divine love, peace and reformation of character. We are tuning in the nature of every human being and we are tuning hearts to become the sublime abode of divine presence.

The world needs to understand the nature of this mission, of this message. On one hand, Pakistan has earned a bad name in the world. This is because Pakistan is a country where there is a lot of corruption in every department of the government; from bureaucracy to democracy. Every single citizen of the country is corrupted, for except a few. But we do not count everyone when we pass the verdict; we always mention the majority - and the majority in the country of Pakistan are corrupt. Pakistan has become notorious for its corruption, for its people who have fallen prey to evil traits and have become fanatics, extremists. Religious extremism in the country is taking its toll every single second. As the time passes on, the number of terrorists is increasing in Pakistan. And this, along with so many other reasons, is because of the bad governance in the country. If necessary measures were taken by the government, if the police force was capable and trained enough to counter terrorist activities and atrocities of hatred, they would have taken care of these terrorists a long time ago. These are the principle reasons why extremism is taking its toll on the country of Pakistan.

When you see Pakistan, you see the Pakistani capital, Islamabad, or you see Lahore and Karachi. But this is not the real Pakistan. If you go interior Sindh, interior Punjab and interior Fatah, you will see that thousands of young children do not have food [to eat] and clean water to drink, let alone getting education. In interior Sindh, in the district of Tharparkar, small children, 2 months of age, 1-2 years of age - every day, at least a dozen young babies are dying there because there is no food available for them. Because there is no milk for them. There is nobody who will take notice of this suffering. And these religious people, do you know what their help is? They will organise a protest, they make prayers for them and they think they have done their job.

It is your duty and it is my duty to take care of our fellow human beings. This is God's creation.

But had God realised his responsibility, then in that case you and I should not be making prayers for these people. This is ridiculous that you go into a mosque, temple or a church and you raise your hands and you ask God to have some mercy on these young babies who are dying. Do you think God is not aware of this? We are just fellow human beings, fellow citizens of the same country. Of course, our neighbours and fellow human beings have some sort of right on us. But then again, before everybody else, this is God's foremost responsibility. But God hasn't done it. Some people die in Pakistan because they eat a lot; and some others die in Pakistan because they have nothing to eat.

We have so many reasons to dislike and disapprove of Pakistan. Because Pakistan is a hub of terrorism, corruption and fanaticism. [They demoralise] those social workers who travel into Pakistan from different international destinations; when they come into Pakistan and they make efforts to help the needy ones, they get killed. There are many reasons for a common man to dislike Pakistan; but I want to world to know that there is one reason which is far greater than all other reasons to hate Pakistan. This one reason is so great that you will fall in love with Pakistan because of it. The reason is that the Awaited One, the saviour of the entire universe comes from Pakistan. We are the disciples of the Messiah, the Awaited One His Divine Grace, His Supreme Lordship Ra Riaz Gohar Shahi.

His Divine Grace Lord Ra Riaz Gohar Shahi started off His mission from Pakistan. This is one of the greatest miracles the world has ever witnessed: people were raised up in atmosphere where hatred, extremism and fanaticism were at their culmination and HDG Gohar Shahi turned hearts of many hundred people who are now spreading all over the world and showing the world that light towards the end of the tunnel.

With the efforts of Messiah Foundation, Mehdi Foundation and Kalki Avatar Foundation International, the world is getting to know the Awaited One. We are spreading not just the word of love, but the divine, secretive substance of love.

If you are holding a Pakistani passport, and you are going to the USA, Australia, Japan, England, France or Germany, maybe your travel is taking you to these destinations because of the economic crisis in your country. However, there are people who are holding Pakistani passports, they are well-off, well-educated and they have visas in their passports of all these countries in their passports; but they are travelling to Nepal. Why are they travelling to Nepal? What is their interest in Nepal, India and Sri Lanka? Their interest has been entrusted in the teachings and message of love.

An international traveller will come to Nepal for one reason: either that person is a mountaineer who wants to climb Mount Everest or he is a Nepali. Nobody else will come to Nepal. Why would an American citizen or British citizen who has a sound business in the USA and the UK want to travel to a 6th world country like Nepal where people of the country has been deprived of their principle necessities of life?

Either somebody who wants to mount the peak of Mount Everest would be interested or a Nepali citizen would go there. Those also go to Nepal who want to spread terrorism in India, because Nepal is the safest transit into India. But people who want to spread terrorism in India will not stay in Nepal for 1-2 years; they would not publicise their address and they would not publicise their mission. They would not meet people. They would enter into Nepal and without making their presence felt, they will swiftly want to cross the borders and infiltrate India so that they can do what they are there for.

But these people of Messiah Foundation International and Kalki Avatar Foundation who have been residing in Nepal for the last 2 years: how on Earth can Nepali police assume so childishly that these peace activists are terrorists? Terrorists are holding bombs and guns; they do not hold pamphlets. If they were terrorists would they stay quiet while you detain them in your police station? No. This is an exhibition of arbitrary persecution and this is against the United Nations Resolution.

My message to Nepali Prime Minister is: if he is interested enough to know what is going on in his country, if he understands the meaning of democracy and if he abides by the UN Human Charter, I would like to invite him to study the message of these individuals who have been detained in Nepal without a reason. Study their message and if you are a son of a human being, then salute them and show some respect to them. Do you know why? Because in your country, people are suffering; they do not have clean water and because of this reason, thousands of people have kidney problems, heart diseases - and when they come to our members of Kalki Avatar Foundation Kathmandu, we blow upon them. And with the help, mercy and bounty of His Divine Grace Lord RA Gohar Shahi, thousands of people have become beneficiaries of this spiritual healing. We are trying to improve the quality of life in Nepal - and this is what you are doing to our members! This is sheer ridicule [of] the interests of divine love and care for humanity.

I vehemently protest against the way the Nepali government has conducted and misbehaved with our members. I would like to invite the Prime Minister of Nepal to let my people contact UNHCR Katmandu within 48 hours, because we are the mark of divinity. If you do not do it, I would like to tell you there is no power on Earth that can hurt and harm my people. I will call my people back from your country and your country will be deprived of the spiritual benefits it would have received by the presence of our organisation in Nepal.

Number 2: how careless is your media! They have made up a story all of the sudden. They are story writers. The way they dramatised and fictionalised the entire scene, like bombs are blowing up! They have attributed all these imaginary scenes to members of Kalki Avatar Foundation. At the end of the day, when the truth was dug out, they found out that the members of Kalki Avatar Foundation are innocent, because they are peace and love activists.

There is a 'guru' there who has a commercial spiritual institution. His business was going down because of the presence of Kalki Avatar Foundation - because we are genuinely helping people and we are the flag-bearers of spiritual power and authority. We are not after money - we spend money to reach you. And we reach you to help you, not to deceive you. A conspiracy plot was netted between policemen and politicians in order to assist that commercial guru; this man, Roshan Bharti, was appointed to the job. He made fake ID's and he sent emails attributing them to our members. This conspiracy plot was then unfolded.

It couldn't have been a secret for a long time because we have two divine eyes always looking at us. Whenever we are in trouble or hot waters, those two divine eyes notice everything and they take care of us. Now it is learned that the police and the government are in the state of awe. They do not know what to do. They hyped up this fictional scene and attributed it to terrorism so much; now, when they got to the bottom of the truth and found out that we are activists, they are now trying to find an exit strategy. The easiest way of purgation - of washing up your sins - is the help these members of KAF meet with UNHCR; at the same time, you must issue a press release in which you declare that all these members were falsely alleged and attributed to acts of terrorism and they have been acquitted, exonerated and they are innocent people. This press release has to be issued from the police. If you do not do that, I am very sorry to say that you shall be cursed.