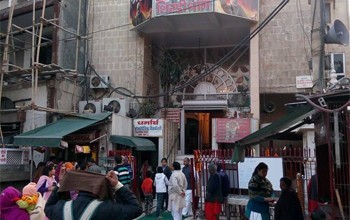 Soon after the rally began, the street was filled with media representatives and police. With emotions running high, our members burnt their Pakistani passports, Pakistani flags, and effigies of Maulana Fazlur Rehman.

Due to them burning their passports and thus being in India without proper documentation, our members were subsequently arrested and sent to Tihar Jail.

What are your social plans?

Well, we are a spiritual movement headed by His Divine Grace Ra Gohar Shahi who is the messenger of love. It is not about any religion, it is not about any sectarianism; it is all about humanity, peace and love. And there are thousands of people who follow His Divine Grace Ra Gohar Shahi in Pakistan and all over the world. Even in India, there are people who believe since His Divine Grace has visited India in 1997 and addressed 5000 people here. After that, Lord Ra Gohar Shahi visited America, Canada, Australia, England, all over Europe, and so many other countries in Asia. So our basic principle is Divine Love; unifying the hearts and the souls of the people no matter what religion and sect they belong to.

In the name of freedom, innocent people are being killed. What is your view?

Well as I perceive it, this is a deep rooted problem. We see the conflict of Kashmir started because they were fighting over the land, and then it became a grudge. They lost East Pakistan, which became Bangladesh; and the Pakistani army holds a grudge against the Indian army because they think that India was involved in breaking Pakistan into two pieces. They are holding a grudge against India and ever since the fall of Dhaka in 1971, they have made it their goal and aim to do something nasty to India. These atrocities have risen to an extreme degree and they are infiltrating people, especially Islamic organisations.

The Pakistan government is not sincere in solving Kashmir conflict, simply because they want a land. They have lost a land and they want to regain a part of land; this is because of the grudge they have in their hearts. This is why they are carrying out all these atrocities and terrorist acts. These militant organisations in Pakistan like Lashkar-e-Tayyab, Jaish Mohammad, Harkat-ul-Ansar, Sifaa-e-Sahaba and others have apparently been banned by the government of Pakistan, but undercover the government is supporting them. This is why the atrocities are still being committed at a large scale everywhere within Pakistan and in India also. So you may have realised that any government, whether it was the government of Benazir Bhutto, Nawaaz Sharif, or General Pervez Musharraf, the agenda on the Kashmir conflict is the same because this is a policy matter for the government. This is why they don’t differ on it.

Is it good to kill innocent people?

Well killing innocent people in the name of religion and in the name of God doesn’t justify killing. Killing is just killing and it is not allowed in any religion. And those who are carrying out the butchery and massacre of innocent people, whether they apparently belong to any religion, do not actually belong to any religion. These are the enemies of the humanity, whether they claim to be Muslims or they claim to be any other. That’s my perception.

Actually these atrocities and terrorist acts are because of the hatred in hearts. In order to wipe out the hatred, we must introduce the practical substance of love. That love is to be filled in hearts and the hearts must be unified with the help of Kalki Avatar. And we here promote the divine teachings of Kalki Avatar Ra Gohar Shahi who has this authority to unify these hearts. He fills hearts with divine energy and He brings out the devil from our bodies and from our hearts. When finally, the hatred is wiped out from the hearts, love is implanted. And it is love that brings peace about.

If we are not going to wipe out the hatred from hearts, no matter how lengthy the speeches we make are, no matter how apparent our efforts are, it is never going to work out. In order to bring about peace, we must implant true platonic love of God in our hearts and this is exactly the message of Kalki Avatar Gohar Shahi.

There are differences and there are many idols of hatred. Religions have been corrupted because of the religious scholars, who do have the knowledge of the books, but they do not have any spiritual insight. They do claim to practice the teachings of their religion, but deep down in their hearts they do not understand the true meaning of their religion. Like Muslims, who claim to be true Muslims, but are using Islam as an instrument to wage war against innocent humanity in the name of Holy Jihad. I mean, nowhere in the Qur’an or in the Prophetic Traditions did Mohammad say, ‘Kill any innocent human being’. This is not Jihad; the true understanding of Jihad is to wage war against those who want to eliminate your religion. And today, Islam is in no danger in any country; there is no enemy of Islam. If India talks about Muslims, it talks in terms of terrorism, because these Muslims are responsible for bringing terrorism and atrocities in India. So these people who claim to be Muslims, they are actually carrying out massacre and butchery of innocent human beings in the name of religion. This is a total hypocritical disorder and this is not Islam. Islam originally was the religion of peace, but since the introduction of these sectarian elements in Islam, Islam has turned out be a monster. It has been distorted.

Islamic terrorism is a worldwide issue, isn't it?

It is everywhere now.

See the problem is, Islamic terrorism is not confined to one country or one region; it is spreading like a cancer all over the world. Whether it is India, in the Parliament House in New Delhi, a train in Mumbai, or whether it is Casablanca, whether it is Madrid, whether it is the London bombings or September the 11th in New York, America. You will see one hand, one mastermind behind it. Taliban, al Qaeda, these are the Muslim terrorist organisations.

Actually this indicates the end of the times, when the Anti-Christ has to come into this world to spread hatred in the name of the religion. Fortunately, it is not only the Anti-Christ that has to come towards the end of this world, but also Kalki Avatar, the Promised Messiah, and the Imam Mehdi also. So the best solution to this problem is that we unify, that we bring about divine love in our hearts and we look for Kalki Avatar.

America is the most powerful nation on Earth. If America is not able to combat against these people, then India is not going to make a win over these people. We need to look for divine help. We need to turn our heads towards Kalki Avatar, because Kalki Avatar is supposed to help the humanity come out from the crisis of hatred and crisis of terrorism. It may be the only solution we may have, for as far as we have seen a lot of movement has been made but no results came out. This is my perception.