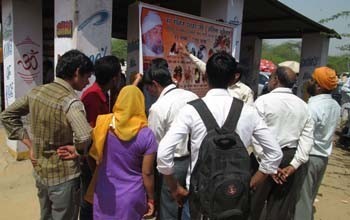 The following are selected excerpts from His Holiness Younus AlGohar's interview with Siyatha TV in Sri Lanka.

Religions and the Spiritual System

All the religions were established by great personalities. These personalities were sent by God, so no religion is bad. However, what happened in the last 100-200 years is that almost every religion has lost the spiritual system.

The problem is: people are still religious but something is wrong with their methodology. Some important part of the knowledge of the religion is missing. This is why they are misled into wrongdoings. When the youth see these religious people, they are not inspired by them because they always fighting. They are full of hatred.

Spirituality is the key and solution to the existing problems.

Nowadays, people are changing their religions. I don’t think it’s going to make any difference because nobody is connected to God through any religion.

Because of the lack spiritual knowledge in all these religions, people have become intolerant.

Lord Ra Gohar Shahi is sent by God and there are Divine Signs [proclaiming His advent].

His images have become prominent on the Moon, the Sun, on Mars and the Holy Black Stone. The Holy Black Stone is greatly revered and people, out of love and affection, kiss it. It is believed that when they kiss it, all their sins are washed away. God has manifested his signs in the form of images of His Divine Grace Lord Ra Gohar Shahi and people all over the world believe Lord Ra Gohar Shahi to be Kalki Avatar, Imam Mehdi and Messiah.

According to the divine plan, His Divine Eminence Kalki Avatar/Imam Mehdi/Messiah Gohar Shahi is here for the entire humanity, for everybody in this world. It is not physically possible for everybody to see him in person. That’s why these images have become prominent. If people look at the Moon, when they see the image of HDE Gohar Shahi, they can speak with that image and they will have a reply. They can also receive spiritual healing and spiritual grace. All those things can be obtained from the image on the moon.

He is love, He is for everybody and His purpose on Earth is to teach everybody love and peace. [He is] uniting all humanity.

Kalki Avatar Lord Ra Gohar Shahi is not a physical doctor; he is doing something which nobody can do. He can heal the wounds of the soul.

These wounds of the souls cannot be healed in any hospital by doctor. So people will approach His Divine Grace Lord Ra Gohar Shahi for their spiritual ailments and spiritual wounds - which nobody can [heal]. And His blessings are for everybody without any hindrance, without any limitations, without any discrimination for everybody.

Kalki Avatar right now is in occultation and physically is not making any appearances to common people. However, the time will come when he will become apparent and people will be able to meet with him. Through our representatives you may be in conversation with Lord Ra Gohar Shahi.

Meditation that we propagate is a little different than what others describe. This meditation that we promote is done after the enlightenment of the heart and the soul. When the soul is enlightened, when the heart is enlightened then the souls inside our body become worthy of making a spiritual journey. When the journey is performed by these souls and they arrive at their respective spiritual station that is called meditation.

His Divine Grace Lord Ra Gohar Shahi has penned down a book on spirituality and this book is available online and it can be downloaded. It is available on www.amazon.com and other international book stores. If people study this book, they will understand the purpose of life. Maybe it will bring a change in their lives.